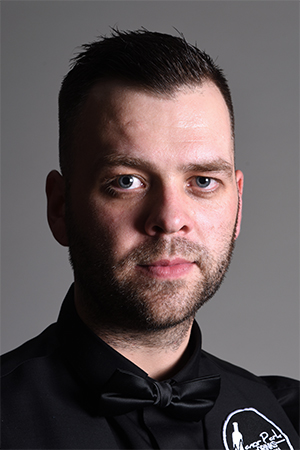 Jimmy Robertson and Ashley Hugill moved through to the next stage of BetVictor Championship League Snooker on Day 12 as top seeds Joe Perry and Stephen Maguire failed to get out of their respective groups.

Robertson topped Group 4 on Table 1 after seeing off World Number 20 Perry In the final match of the day, 3-1.

The 2018 European Masters winner started his day off with a comfortable 3-0 win over Sean Maddocks with breaks of 61, 100, and 66 before having to salvage a point from 2-0 down against Jimmy White. Robertson’s key moment in the match coming with the highest break of the tournament so far (140).

The closest competitor to Robertson came in the way of Perry who began emphatically with back-to-back 3-0 wins over White and Maddocks leaving a re-run of the 2018 European Masters final to decide who would make it through.

Things were not decided until the final moments after Robertson took a 2-1 lead into the last frame.

An initial breakdown at 31 put Perry at the table but he failed to capitalise on it at 36 where his plant didn’t pay off. That moment did look to be pivotal but there was another twist after Robertson missed a black off its spot, but his pain was short-lived eventually seeing it over the line.

Robertson: “I feel a nervous wreck. It’s brilliant to get through, I am really chuffed with that. On the whole, I am happy with parts how I played with, but I also missed a lot of balls today but that’s what I’d expect when I haven’t played a competitive tournament for four months, just delighted to get through.”

“It’s not a bad position to be in (knowing he needed to win), I didn’t do it convincingly, but a win is a win and I am through to the next stage.”

“After going through that last season (nearly losing his Tour card), I don’t really want to go through that again. It wasn’t a nice experience. I’m so happy to come through what I ended up, coming through in the end and keeping my tour card. It might make me stronger this season, so I am hoping to get a few results and crack on this year.”

“After I won that tournament (2018 European Masters), I didn’t expect to be consistently getting to the later stages of tournaments, but I didn’t think on the other hand I’d be doing as bad as I did after that. Once you start losing on tour, it’s very tough and your confidence goes a little bit. But I know what it takes to win when I’m at the latter stages.”

Hugill’s approach in Group 24 of taking on any ball that looked to be on as well as demonstrating vision in some excellent long pots proved to be key.

The Yorkshire cueist began with a two-all draw against Sunny Akani including a break of 80 before following it up against Maguire where he took all three points to move top of the group at the break with the only win of the afternoon session in the group.

Another two all draw to start the evening between Akani, and John Astley kept the group wide open and an opportunity for Hugill to progress. Akani’s whitewash victory over Maguire meant Akani moved top of the table but only temporarily.

A victory for Hugill would send him through whilst Astley knew a 3-0 win could be enough if he secured the group highest break along the way. In the end, though, it was all one-way traffic with Hugill securing top spot with a 3-0 win.

Hugill: “it’s just the start to the season I was looking for. I know everyone had drawn to that point so I knew beating Stephen would get me close to winning the group.”

“I realised last season, I was being too tentative in a lot of matches, I realised I was always trying to go under the radar and not backing myself enough. This season I am just trying to play with a lot more of authority around the table.”

Coverage begins at 12 noon (UK time) and is live on FreeSports (UK), DAZN, Zhibo.tv (China) and Viaplay, with Table 2 live globally at Matchroom.Live. Full broadcast details can be found at https://championshipleaguesnooker.co.uk/watch/