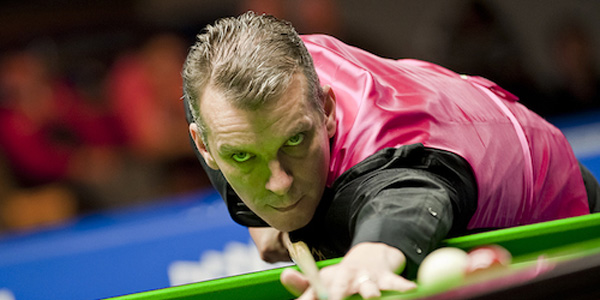 Mark Davis and Chang Bingyu won their respective groups on the sixth day of Stage One action to progress to Winners’ Week of BetVictor Championship League Snooker.

Both won their last matches 3-0 to take top spot in their groups and will now return to Morningside Arena, Leicester for Stage Two in August.

Davis went into his final match of Group 12, against Anthony McGill, knowing he would need to win 3-0; a 3-1 success would be enough if one of his frames was won with a break of 112 or better. That was because Yuan Sijun had already beaten McGill and Billy Castle. Davis also had a win over Castle to his name, and he had drawn 2-2 with Yuan.

A better frame difference meant a 3-0 would be enough for Davis but 3-1 would leave them with identical records and a 2-2 result in the head-to-head. Sijun had already made breaks of 107 and 111, so a 112 would be required for Davis to advance on high break if he won but conceded a frame to McGill.

However, it didn’t come down to that as Davis took advantage of an out-of-sorts McGill to wrap up a 3-0 success. It meant Yuan finished second with Castle third and McGill finished bottom without registering a point.

“It is the perfect way to start the season,” said Davis. “I have to be honest, Yuan Sijun played the better stuff in our group. I did well to get 2-2 out of my first match and cued better after that, but I made some silly mistakes which I just tend to do now at my age. You dig in, try your best and hopefully that is enough.

“We all know how good anthony is so it probably helped me that he had nothing to play for, because he just wasn’t with it. I feel fortunate but it doesn’t always work out that the best player gets through.

“I felt ok in the final match. At 2-0 I had a chance early on and started to feel it because it was a good chance and I messed it up. I knew it it went 2-1 it was a slim chance, having to win the frame and make 112, but once I am 2-0 up I have two options; win the next frame or the one after with a big break. Luckily for me it wouldn’t go in for Anthony and I managed to fall over the line in the end.”

On table two, Chang Bingyu beat Dean Young in the day’s final match to leapfrog Chinese compatriot Pang Junxu to top spot in the Group 31 table. Chang ended the day unbeaten after beating Young and Luca Brecel. He drew with Pang, which left Chang needed to beat Young, which he did in just 40 minutes. Pang finished second to win £2,000 while Brecel’s only win of the day, 3-1 over Young, meant he took the £1,000 prize for finishing third.

BetVictor Championship League Snooker continues on Monday with Martin Gould and Ken Doherty among those in action. Live scoring along with league standings and the match schedule is available at www.championshipleaguesnooker.co.uk

FORD THROUGH AND BAI ADVANCES AT BETVICTOR CHAMPIONSHIP LEAGUE SNOOKER